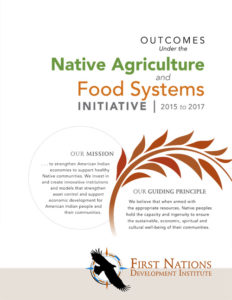 Now, First Nations has issued a report that details the many successful outcomes that stemmed from these projects during that time period. Titled Outcomes Under the Native Agriculture and Food Systems Initiative – 2015 to 2017, the report is available for free from the First Nations website.

Additionally, First Nations has produced a companion publication that details extensive feedback from its NAFSI grantees. This report, which covers the longer time period of 2011 through 2017, is also available for free from the First Nations website. It is titled Native Agriculture and Food Systems Initiative Grantee Feedback Report – 2011-2017. Besides feedback on the NAFSI grant program and process itself, this report highlights the current state of grantee programs and other critical areas of need to grow and sustain local programs.

Thanks to various philanthropic supporters, since 2011 First Nations has become the largest grantmaker in Indian Country that supports programmatic efforts to reclaim control of Native food systems. Under NAFSI, First Nations’ grant programs have supported projects related to agricultural entrepreneurship, enterprise development, increasing access to fresh and healthy foods, development of tribal food policy, reclamation of traditional diets, and increased food security in American Indian, Alaska Native and Native Hawaiian communities across the United States. In all, the goal of NAFSI is to support innovative, ground-up program models in Native communities and disseminate those models to Indian Country as a whole.

In the first report, First Nations reveals that during its NAFSI grant periods from 2015 through 2017, it received more than 356 funding requests totaling more than $10 million, which illustrates a large and continuing unmet funding need for food-system and food-sovereignty projects in Native American communities. In detailing some of the outcomes, it finds that grantees generated in excess of 5,000 pounds of food through their projects, much of which was used for local economic development (generating additional income for local producers), donated to lower-income members of the community, or which was utilized for community education and food-related traditional and ceremonial practices. The report estimates that more than 30,000 Native people were served by these projects, including over 4,000 elders and 7,600 youth. The various projects included community gardens, farmers’ markets, farm-to-school programs, and community nutrition or healthy eating classes. The report also found that 168 jobs were created by these projects, and that 89 small businesses were created or sustained by the efforts.

Is the second report, it is revealed that between 2011 and 2017, First Nations received an astounding 1,247 requests for grants totaling $35.6 million, but that First Nations was only able to award 266 grants totaling $6 million, again highlighting the large unmet need for funding for such efforts. And, while this report primarily concentrates on specific grantee feedback about their experiences with First Nations’ NAFSI grantmaking program (First Nations gets high marks), it also summarizes overall findings and concludes that as the Native food movement evolves and expands, so should funding and programmatic efforts.

Both publications can be downloaded from the First Nations online Knowledge Center at https://firstnations.org/knowledge-center/foods-health/research. (Please note that if you don’t already have one, you will need to create a free online account to download the report.)