As recently as the 1970’s, women’s history was virtually an unknown topic in the K-12 curriculum or in general public consciousness. And even more so, Native women in history are often absent. This month, Red Wind will be sending out emails featuring two native women in history to help build our understanding of the role Native women have in shaping our society.

Chosen as president of Antioch University Seattle, Dr. Manuelito-Kerkvliet became the first Native American woman to ascend to the presidency of an accredited university outside the tribal colleges. Prior to her presidency in Seattle from 2007 to 2013, she served as the first woman president of Diné College, a tribal college with eight campuses located on the Navajo reservation. She is the great-great grandaughter of Navajo Chief Manuelito. She is born into the Towering House clan, born for the Salt clan. Her maternal and paternal grandfather clans are the Mud and Weaver clans. 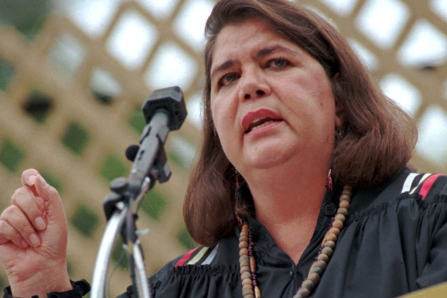 Wilma Mankiller worked for several years as a leading advocate for the Cherokee people, and became the first woman to serve as their principal chief in 1985.

Wilma Mankiller was born in Tahlequah, Oklahoma, on November 18, 1945. Four decades later, in 1985, Mankiller became the first female principal chief of the Cherokee Nation. She sought to improve the nation’s health care, education system and government. She decided not to seek re-election in 1995 due to ill health. After leaving office, Mankiller remained an activist for Native-American and women's rights until her death, on April 6, 2010, in Adair County, Oklahoma.